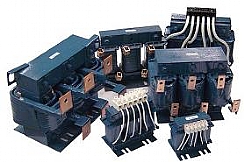 The MTE RL Series Line/Load reactors help protect your valuable assets from power line disturbances that would otherwise cause nuisance tripping or damage to inverters, variable speed controllers and other electronic equipment.

RL Line/Load reactors are also very effective in reducing harmonics produced by inverters and drives and will help you meet IEEE 519 performance standard for harmonic control.

RL Line Reactors can be placed on the input or the output of an inverter or variable speed controller.

When used on the input side of an inverter/drive, the RL Reactor will protect other electronic equipment from noise created by the inverter/drive. They will also protect the inverter/drive from incoming surges and spikes and will reduce harmonic distortion therefore helping you meet the IEEE 519 harmonic standard.

When used on the output side of an inverter/drive, the RL reactor will reduce dv/dt and motor terminal peak voltage. They will also reduce motor temperatures and audible noise in motor loads.

5% impedance Line/Load reactors provide the benefits of the 3% reactors plus are suitable for reducing harmonic currents and frequencies, reducing motor temperature and noise and meeting IEEE 519 standard.